provided by eFloras
Cultivated as an ornamental and aromatic plant in China [Africa, Europe].

The species name angustifolia is Latin for "narrow leaf". Previously, it was known as Lavandula officinalis, referring to its medicinal properties.

English lavender is commonly grown as an ornamental plant. It is popular for its colourful flowers, its fragrance, and its ability to survive with low water consumption. It does not grow well in continuously damp soil and may benefit from increased drainage provided by inorganic mulches such as gravel. It does best in Mediterranean climates similar to its native habitat, characterised by wet winters and dry summers. It is fairly tolerant of low temperatures and is generally considered hardy to USDA zone 5.[4] It tolerates acid soils but favours neutral to alkaline soils, and in some conditions it may be short-lived.[5]

The following cultivars of L. angustifolia and its hybrids have gained the Royal Horticultural Society's Award of Garden Merit:-[6]

The flowers and leaves are used as a herbal medicine,[19] either in the form of lavender oil or as a herbal tea. The flowers are also used as a culinary herb, most often as part of the North American version of the French herb blend called herbes de Provence.

Lavender essential oil, when diluted with a carrier oil, is commonly used as a relaxant with massage therapy. Products for home use, such as lotions, eye pillows (including lavender flowers or the essential oil itself) and bath oils, etc., are also used. Both the petals and the oil are the most popular ingredients in handmade soap.

Dried lavender flowers and lavender essential oil are also used as a prevention against clothing moths, which do not like their scent.

Lavandula angustifolia is included in the Tasmanian Fire Service's list of low flammability plants, indicating that it is suitable for growing within a building protection zone.[20] 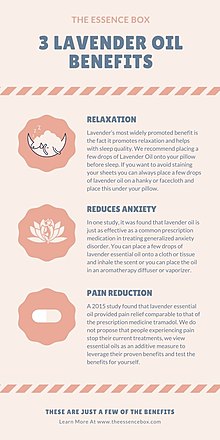 Lavandula hybrids are referred to as lavandins. Hybrids between L. angustifolia and L. latifolia (spike lavender) are called Lavandula x intermedia. They bloom later than the ordinary English lavenders.